Cool under pressure, operator keeps everyone safe during tire blowout

NOV. 9, 2021 -- GoTriangle Bus Operator Jonas Theodore was driving Route 405 to Chapel Hill on U.S. Highway 15-501 South last month when a front tire blew out, throwing tire rubber all over the road. Traveling at highway speed with only seconds to safely bring the 40-foot bus to a controlled stop, Theodore saved the day.

“If not for his coolness under pressure, training and eight years of transit driving experience, bus passengers and other motorists could have sustained injuries from an accident,” says Jimmy Price, GoTriangle’s Manager of Safety, Security and Training, noting that road debris likely caused the tire to shred. “He followed his training and remembered if involved in a tire blowout situation to follow emergency procedures.” 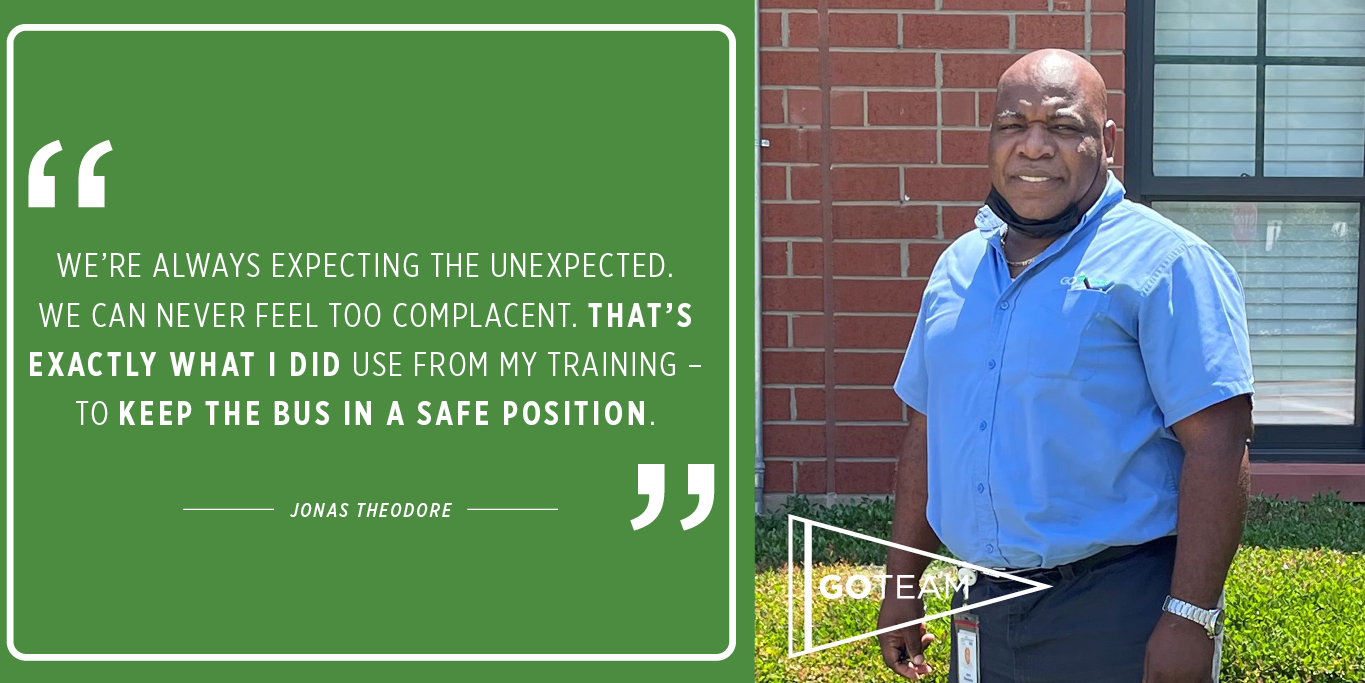 GoTriangle Training Coordinator Gregory Langley agrees. “Theodore remained calm,” he says. “Once he sensed what was happening, he focused on what was important – keeping the bus under control under steering and allowing the bus to slow down where he could brake – and brake smoothly – as he worked his way to get to the far right lane before coming to a stop.”

Theodore says after he heard a big bang and felt the front side of the bus drop, he realized that the front tire had blown out and his training just kicked in.

“Our model is to stay focused and don’t ever panic in any situation,” he says. “We’re always expecting the unexpected. We can never feel too complacent. That’s exactly what I did use from my training – to keep the bus in a safe position.”

He also managed to convey calm, he says, adding that it’s important for passengers to feel comfortable and know that somebody is in charge. “I guess that’s the feeling they had. Even though they heard the noise, there was no panic inside the bus.”

Driving passengers to their destinations isn’t just a job, Theodore says. It’s a career that gives him purpose. “Whatever you do, you’ve got to be passionate about it,” he says. “You’ve got to put your heart into it to try to do the best you can. And when I’m driving that’s exactly my MO – be the best at whatever you’re doing.”

As he picks up and drops off passengers, he says he knows that his work matters. “Sometimes people are coming from work,” he says. “You realize that person is depending on you.”

Theodore, who grew up in Haiti, speaks French, Haitian Creole and Spanish and has been promoted to the highest bus operator rank since joining GoTriangle in 2013. Over the years, his passengers have written notes of praise about him, Langley says, and Theodore has helped train GoTriangle’s new operators for at least five years.

“Jonas has always been a good operator,” Langley says. “He has been one of our cadet trainers, one of our go-to guys to help with training new hires when they’re getting ready to operate and serve.”

Price says both GoTriangle bus and paratransit operators are trained and expected to react quickly and make critical safety decisions during emergencies.

“We are extremely proud of our operators who drive thousands of miles throughout the Triangle to provide safe and reliable transit services to our riders and equally proud of our training team that trains them.”

For his part, Theodore says he’s grateful to his GoTriangle team, both coworkers and managers, who have kept and continue to lift his spirits on days when he needs it. “Each time, they were there just on time,” he says. “I am very thankful to be recognized, to work not too far from home and be among good friends and co-workers.”